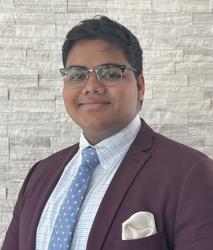 Sam Padmanabhan attended East Ridge High School and competed extensively in Speech and Debate during his time there. While in high school, Sam was a captain of the Speech and Debate teams, seeing competitive success at the local, state, and national levels. He qualified to the National Speech and Debate Association’s National Tournament in Extemporaneous Speaking and Congressional Debate, as well as qualifying to the Minnesota State High School League’s State Tournament in Extemporaneous Speaking and Public Forum Debate. As a coach, Sam has been an Assistant Coach on the Woodbury High School Speech Team for the past two seasons. He has coached numerous students to local and national success, namely coaching a semifinalist (Top 14) in Extemporaneous Speaking at the NSDA National Tournament. He has thoroughly enjoyed his time coaching speech at Woodbury and is excited to begin coaching debate as well! Sam currently attends the University of Minnesota, enrolled in a joint BA/Master’s of Public Policy program through the Humphrey School of Public Affairs. Sam is looking forward to an exciting season with the inaugural Woodbury High School Debate Team! Go Royals!

Woodbury High School is excited to begin its inaugural season as a debate team. The team will compete in Congressional Debate as a part of the National Speech and Debate Association (NSDA). The competitive season will run from September through December, giving students the opportunity to compete at local, district, and even national circuit competitions. There will be an informational meeting for any interested students and parents in early September (date TBD). Please don't hesitate to send any questions to Sam!